This week's Poem a Week Challenge was to write an ode. I decided to write about my mom, instead of writing more poetry about the pandemic. So this is what I came up with. It is still hard to write about Mom, even though it's been 20 years. It's funny -- I thought when I had kids Mother's Day would start to mean more to me, but it really hasn't worked out that way. But Happy Mother's Day to all the moms out there.

An Ode to My Mom


I always feel left out when it comes to this sort of thing.
Tributes to moms. Mother-daughter weekends. Mother’s Day.


My mom died twenty years ago this month. Right after Mother’s Day.


Were she alive, I would have already ordered a bouquet of flowers to be delivered to her.


I would be thinking of our phone call on Mother’s Day. What anecdotes I would relate regarding my kids. What Todd is up to. I would tell her about my week.


But she’s gone. So I will instead remember her to my kids. I will tell them stories about her.


Like the time she marched down to City Hall to demand that I be allowed to play baseball, even though I was a girl and there were no girls on the team.


Or the time she chased a boy out of our driveway when he called me fat. She had a broom and threatened to beat him with it if he didn’t apologize. He apologized.


Or the time she told my high school English teacher that I was coasting in his class and needed to be challenged, so he made me rewrite all my essays. Which I hated at the time, but appreciated later.


My mom was my fiercest advocate. She called me out on my nonsense. She was funny and sweet and tough. I try to be like her. I miss her.

This is my favorite one so far:

You did it! You mastered quarantine!

You will notice a theme in all my poetry during this challenge -- all Covid19 focused, all the time!


In 2020, the world turned upside down.
The zombie apocalypse snuck up on us.
We should have been more ready.


We sit inside on our couches.
Eat all the snacks.
Watch all the TV.
Read some books. Write some poetry.


It is hard to just sit inside. I miss the sunshine on my face.


To taunt us, we have had many gorgeous sunny days outside our windows.


There were some surprises.


I have really enjoyed all this time with my family.


I did not bake sourdough bread.


But I made popcorn on the stove the old-fashioned way.
Which totally impressed my children.


I have spent too much time judging the un-masked people walking around outside.
That can’t be good for me.


Time has changed. Weekdays bled into weekends which bled into Easter and spring break.
Now it’s almost May. What does that even mean anymore?


I’m working on that part. Figuring out what it means.

Here is the second poem I wrote for this challenge:


Or that when it did,
March would bring
the end of the world.


I enjoyed missing
my morning commute
And my long drive home…


The shops and restaurants are closed.


How good we had it in February!


How I long for school to reopen!


To make the drive to and from work…


To talk to people to whom I am not related.


Oh February… I should have appreciated you more!

California has been under Safer-at-Home guidelines since mid-March. I have been teaching my classes remotely, which has been a challenge. In an attempt to make school feel normal-ish, teachers have been offering activities students can do after school. I host dance parties every Friday after school.

One of my favorite coworkers, Suzanne, a fellow English teacher, hosts a Poem-a-Week Challenge. I have been attending. It has been wonderful! It has gotten me writing again, which is awesome. I thought I would start posting the poems I write here. (It has been so long since I've used this blog!)

This is the first poem I wrote for this challenge:

I’m dying to open the door.

Oh my God! Please let me open the door.

But I can’t open the door.

No one can knock on my door.

We have to stay in.

I want to go out. I want to throw open the door and burst out like confetti!

I guess I will open a window.
Posted by AMY at 3:20 PM No comments: 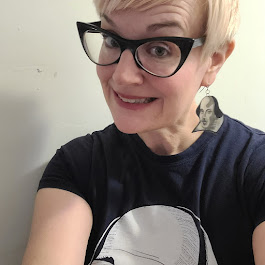